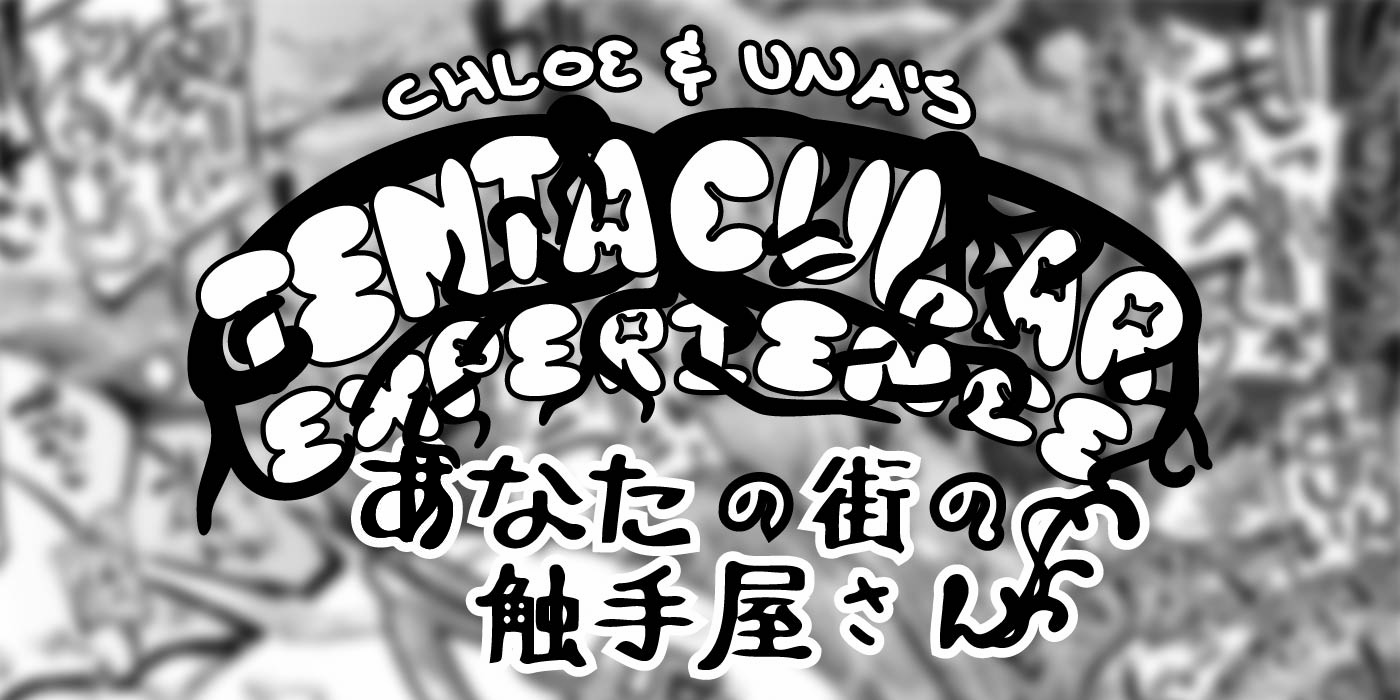 Thanks to all, uh, four of the people (none of which were Chloe) who listened to the last episode and we hope you enjoy this one too!

Shokushu is the Japanese word for “tentacle.” People like to point out that the term “arms” is more fitting, as a “tentacle” is a specific feature of certain species and not present in something like an octopus, but we’ll stick to the colloquial understanding as it gives a distinction between the “arms” we’re speaking of and those of, say, humans.

Shokushu kan would be the most literal equivalent to “tentacle rape” in Japanese. The word kan is, similar to the word “rape,” a general term for illicit sexual acts. While this does explicitly include rape (goukan), it may also include adultery (kantsuu), bestiality (juukan, historically also used for sodomy), etc.

Shokushu zeme is, on the other hand, a fairly common term in the genre which does not indicate that the contents are non-consensual. Rather, zeme here (generally read as seme but voiced due to rendaku) is a word used for tormenting someone in a sexual context. This is more frequently translated as “abuse” or “torture,” but the word “torment” is being used here as I feel it is more fitting for sexual acts.

Moving on to some vocabulary used in the manga itself!

Chapter 4 introduces two new characters as Gachi Rezu A and B. One translation changes this term to “patron,” likely to either avoid attempting to find a succinct translation or to avoid any controversy that might come with it. To understand this term, let’s discuss each word in turn:

Gachi is a common term in colloquial Japanese used for emphasis. You can read it as “hella.”

Rezu is technically a term for lesbian, being an abbreviation of the loan word rezubian. However, like the term “lesbo” in English, it has taken on a connotation of being applied to others in a fetishistic sense rather than to oneself as a sexual identification. The term bian has thus replaced it in the latter case.

In combination, the term gachi rezu may be read as “mega lesbo” or something along those lines. It has, in some places, been translated as “open,” “obvious,” or “crazy lesbian.” Of course, as with all terms which may be considered derogatory, there have been Japanese lesbians who have used the term for themselves, but it’s best to understand the linguistic context of such a choice.

Sidenote: A sort of antidote to the term exists with heta rezu, approximately meaning “awkward lesbian.” Generally, heta can mean “lazy,” but I don’t think that’s really relevant to understanding this term itself.

Our protagonist, Matsuri, is a newcomer to the world of tentacles. Frequently described as a “voracious monster of lust,” she’s prone to melting at the sight of a hot tangle of tentacles. Her weak spot is her breasts.

Yurika is the “mysterious tentacle shop owner.” An educator who truly cares about her customers’ needs. Breeds tentacles for maximum pleasure and utility… hot sleep-deprived tentacle mommy, uwu. Chloe has definitely compared her to a “mushroom guy” or something, which is funny, to me (Una).

Emya, or just Emi (エミ), is a veteran tentacle user, tentacle shop regular, friend of Yurika, and willing test subject for new tentacles. “The number of tentacles she’s given birth to is uncountable,” like, she says she’s addicted to giving birth.

Utage is Matsuri’s older sister and apparently even more of a nympho. Into being dominated by large and powerful tentacle monsters, such as Hugs. Unemployed but refuses to work for the tentacle shop because it would be “bad for her health.”

Shogo is a sentient tentacle colony that acts as Yurika’s assistant and a frequent sexual partner (perhaps love interest?) to Matsuri, as well as her mentor as an employee of the tentacle shop. Shogo is hot.

Sumire is Matsuri’s friend from school. She’s not in the series much but the author did say there’s probably going to be a side story featuring her.

Elena is a character who only shows up briefly to check in to a three day long appointment with one “Goliath.”

Karen is half of the one notable lesbian couple in the series, despite the author just sort of never including any men whatsoever in this entire world. She’s gay, dating Uniko, weak spot is her butt, that’s about it.

In Chapter 1, Matsuri enters the tentacle shop for the first time, Yurika (the owner) is helpful in recommending a first tentacle and explains to her proper tentacle care. Enter Emi-chan who kinda got addicted to giving birth. Matsuri buys some instant tentacles and takes them home and prepares them. The tentacles then fuck her, including finding her weak spot (her nipples) and fucking her pussy and her ass. Her sister comes home several hours later to find her just brain-broken and drooling on the floor.

Chapter 3.5 stars Matsuri’s older sister, Utage, and follows her visit to the tentacle shop, in which she uses a fitting room to fuck a massive tentacle monster named “Hug” (because it squeezes her real hard). She likes fucking big strong tentacle monsters, that’s her thing.

Chapter 4.5 is a side story revolving around the lesbian couple shown in the previous chapter, Karen and Uniko. After waking up and realizing something, Uniko casually walks into the tentacle shop (before opening) and explains that her girlfriend, Karen, had an issue with her tentacles. Yurika drags Matsuri along to go address the situation after realizing what was happening; then Uniko fully explains that rather than taking a single tentacle egg? as per the instructions, Karen ate the entire box, and that’s why she is completely stuffed with tentacles.

Yurika attempts to yank them all out, then has Matsuri help… they fail, of course, and call in TERABULK, the big starfish looking monster, which pulls everything out with a single pull. It’s not over yet, tho, as Yurika explains that Karen is still full of eggs! So even more tentacles are brought into the situation to pull each and every egg out of her insides (such an amazing spectacle that Uniko records the whole thing and Matsuri masturbates to it).

Good (thumbs up), very consistent and enjoyable to look at. There’s a lot of detail, like a lot; intense scenes tend to be entire pages of tentacles, SFX, and moaning. This is probably why the chapters all take so long, and if so then I don’t care how long I have to wait… well, I do, a little.

The way the artist draws hair is nice, it looks a lot like the tentacles, it’s cool.

Throughout the series, Yurika is shown to take her job very seriously, to the point that she seems to see herself in part as a sex educator, and caring for the sexual liberation of her customers. This is shown in Chapter 1, when she says “by the way, are you good at pleasing yourself? Sorry. I’m talking about masturbation. Don’t worry, you don’t have to answer,” which is something an employee at a sex shop would absolutely ask someone who was inexperienced in attempt to help them. She also says things like “it’s never a bad thing to know more about your own erogenous zones”. In Chapter 3, she avoids letting Matsuri sample the tentacles while under the influence of an airborne aphrodisiac, showing responsibility in her craft as well. All around a great person to trust with one’s sexual well-being.

There’s also a point in the manga where Matsuri, when talking about a tentacle to some customers, goes on a long tangent about the value of training one’s kegel muscles. At points it feels like the author is using the background of incredibly hot, utterly impossible fantasies of tentacle fucking as a platform for explaining some important concepts of sexual health.

III-3 Will there be femboys?

The beginning of Chapter 4 includes a news article about the rise in demand for male-use tentacles, which may be foreshadowing the possible future inclusion of men in the series. When asked if there are any men in the world of this manga on Twitter, the author replied by saying “内緒です😊😊😊😊😊😊” (“It’s a secret” followed by six smiling face with smiling eyes emojis). We can really read into this!

Some of the author’s other works do include men, but typically in “dominant” positions, so seeing one in a “submissive” position (i.e. having his brains fucked out by tentacles) would be a fun and interesting inclusion to the corpus. There are, however, a couple of chapters of a previous series (chapters 5 and 6 of “復興!? 異種交配―魔族と人間の共生時代―”) which include a girl with a dick… not really what I’m talking about here, tho.

I, Chloe, find this unlikely but am still hopeful.