The Windbreak Forest Lattice in Hokkaido

Recently I’ve taken to spending a lot of time trawling across Google Maps to seek out inspiration. This idea first came to me as something to be done when building in Cities: Skylines as described by YouTubers such as Two Dollars Twenty and Pres, the former of whom specifically described the practice in his video on creating realistic cities. I expanded on this usage when, as inspired by @Send_Lwyds’ thread, I began work on a world map. The issue with the methods described by many on this topic is they take a wholly reductionist view on the formation of landmasses. This is something that I was compelled to iterate on in a tweet:

thanks for listening to my ted talk (is this still hip)

The first point here was decently covered by Artifexian in his video on creating fantasy maps, but I wanted something more in-depth. While working on the second part of my blog series on worldbuilding, I became particularly interested in island arcs which are a result of plate tectonics that provide many neat landforms scattered across a world that would allow for a lot of further worldbuilding. These form along volcanic arcs where volcanic activity leads to the creation of volcanic islands in the form of a, you guessed it, arc.

One such arc of islands is the Kuril Islands (RU: Кури́льские острова́, JP: 千島列島 or クリル列島), which are mostly in Russia (Росси́я) but parts are claimed by Japan (日本) as part of the Nemuro Subprefecture (根室振興局) of the Hokkaido (北海道) Prefecture. The exact subprefecture here is important as it caught my eye when I was scrolling over the Kuril Islands, and by “it” here I mean this odd sight:

FIGURE 1. A very large grid of trees in the Nemuro Subprefecture (根室振興局) in Hokkaido (北海道).

I didn’t give it much thought originally; at first glance it looks very similar to something you might see in the United States of America (US) via satellite. Of course, the US looks the way it does because of the Public Land Survey System (PLSS), which is a uniquely American policy and not the only reason one might find a grid formation on land. Once I’d recalled this, it made sense to look further into what I’d seen.

Now, it wouldn’t make sense to completely brush off the occurrence of the grid here just because it isn’t exactly the PLSS. There is something to be said about the choice of a grid system for agriculture rather than something like a ribbon farm system as seen in the New France parts of the US for some reason, but this isn’t exactly informative with regards to the exact formation seen here. So, I had to go on a little journey, mostly through Wikipedia because usually you can find at least indicative information there.

A good entry point, I figured, would be the township this is in. There are three actually: Shibetsu (標津町), Nakashibetsu (中標津町), and Betsukai (別海町). Taking a total shot in the dark I guessed door number three (3) here, but the English article is all but useless so I had to go with the very trustworthy method of having Google Translate translate the Japanese (日本語) article. This didn’t quite yield the results I’d hoped for, there was an image of the town from above which I’d hoped would have some comment about the grids, but it did not (now that I’m compiling everything I’m noticing that the filename of this image is actually a pretty good breadcrumb, more on where else it leads later).

Taking a bit of a leap of faith from there, I followed a link to one of the agricultural coops (農業協同組合) in Betsukai: 道東あさひ農業協同組合; I’m not going to include the translated name here because I have high doubts that it is accurate in the slightest. This was also fruitless, so I took a step further out and went for the page on dairy (酪農), specifically the section on dairy in Japan (日本の酪農). In that was a subsection called “State-owned KOSHEN pilot project” (国営根釧（こんせん）パイロット事業), which vaguely indicated that this was a planned dairy farming project in Hokkaido, a sign of hope here. There was a reference to Rojikushima (根釧台地), a page that contained the phrase “根釧台地の格子状防風林は北海道遺産に認定されている,” which was just about what I was looking for. The translation was basically unintelligible but still had significant phrases well enough that I could tell it was what I had been looking for: grid-like windbreak (格子状防風林).

Of course, now it seems fucking obvious. Had I seen the filename on that aerial photo I’d probably have seen the “shelterbelt” part and instantly found a whole bunch of explanatory materials. To be fair, I hadn’t really gotten any sleep at the time, but I was right to draw comparisons to similar structures in the US. There are windbreaks all over, named for the fact that they exist to block out the absolutely terrifying winds you would get if you just had huge empty fields. However, the windbreaks you find just anywhere are typically only a tree or two wide, whereas the windbreaks in Hokkaido are, according to the prefecture’s site, $180\text{m}$ wide.

Clearly, these are no normal shelterbelts, the Hokkaido site referred to them as a heritage site even. I’ve seen them mentioned as a tourist spot as well, which is an interesting occurrence admittedly, so perhaps the site for the Nakashibetsu Tourist Association (なかしべつ観光協会) will have something. If you notice an obvious tonal break here it’s because I took a few days off from writing this to move into my new apartment and I can’t entirely remember where I was going with that last sentence. In fact, let’s just move on.

“That was a dead end, so I’m going to try to find another trail to follow.”

That was a dead end, so I’m going to try to find another trail to follow. The site for Nemuro Subprefecture has a section for historical sites including the specific page “根釧台地の格子状防風林”. Here there is some more information that sort of implies a justification for the excessively wide windbreaks: that there is not only wind but also snow and fog to be dealt with in Hokkaido. This is also mentioned on hokkaidolikers.com (aptly named blog), where the part about snow is also partly justified by pointing out it prevents snow from building up in the fields, but does not distinguish how this would be different from a typical windbreak stopping wind from doing just that. What’s actually interesting about this post is that it is the first resource I’ve come across so far that includes history of the lattice beyond vague indications to the “pioneering era” (開拓時代).

I’m not going to learn Japanese just to make a blog post… probably. With that in mind, take everything I say from here with a heavy dose of salt; I’m at worst directly reading an automated translation and at best doing that but with the edges smoothed by interpreting said translation in context. Of course, I’m only saying this now because I’ve found a source (in Japanese) that explains just about everything I wanted to know. The source I speak of is the Laboratory of Forest Landscape Planning and Design (森林風致計画学研究室) at the University of Tokyo (東京大学); specifically, a report from 2007 titled “巨大な格子状防風林〜北海道中標津町〜” by 秦 裕之, 横関 隆登, Xena Iannes Lapido, and Roni Wijaya. I would love to commission a full translation of this report (which I’m assuming was a project done by the authors during their graduate studies), but a) I don’t have any money and b) it is marked as copyrighted so I’d have to contact the source to discuss that and the language barrier there has likely already been made fairly clear.

Proceeding without any further consideration for the obvious issues. The majority of this report is concerned with land use as it is from an agriculture planning lab, the only section that I’m really interested in is 2.1 Development Plan from the Meiji Era (明治期の開拓計画). 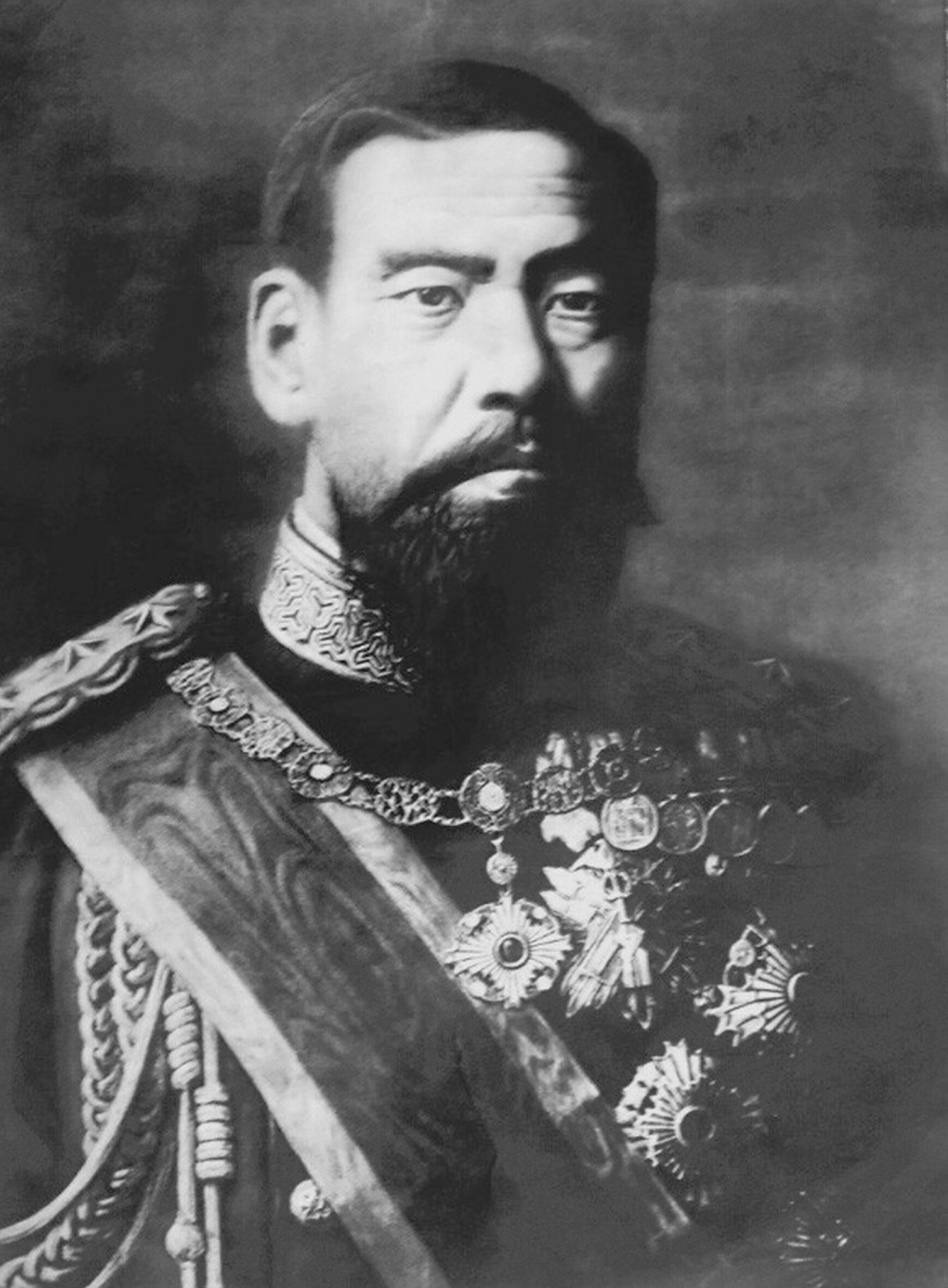 Through careful searching of random combinations of characters around what I was looking for, I eventually found out that what I’d previously referred to as the “pioneering era” was actually a time after the Meiji Restoration when the Meiji government created the Colonization Office (開拓使) in Hokkaido. The term “pioneering” that machine translation produced here is fairly accurate as the government recruited tondenhei (屯田兵), military settler colonists, to settle the region. Knowing this clarifies a bit of the section I had mentioned.

After the initial establishment of this office in Hokkaido in 1869, according to this report, full-scale development began in the area into the 1890s. They followed a grid-like plan in which a base line was established and another base line was created orthogonally to it such that the area could be split into rectangular divisions. The area was, at the time, mostly unexplored and so the land had not been built on; this implies that the mandate for such a large area of forest to be kept as a windbreak was not a reaction to a loss of forest area but rather a preventative measure. The forests were not planted to protect the agricultural lands, rather the fields were cut out of the forest according to an established grid.

There was, however, eventually an effort to plant trees in these forests, but it was not as an expansion but rather as a response to wildfires and deforestation brought about by the demands of railroad expansion in the 1930s. The replenishing then was done with larch, which eventually succumbed to rodents and so was later (in the 1970s) replaces with native species.

This report also mentions the growth of the dairy industry in Japan and how it lead to the expansion of agricultural lands in this area, but the translation is a bit unclear and this wasn’t really my focus. That just about answers all the questions I had, but there’s still a lot more to be learned about this. The lack of resources in English about such a large structure while there are plenty about the military conflicts happening at the same time in the same area points to the massive disparity between our treatment of military and non-military histories. Perhaps, when I find more thorough information on the context, I will revisit this again in a bit more of a formal essay. As section 4.5 of the Forest Science Planning Laboratory’s report says, there aren’t many people that understand the origin or even the necessity of these forests, and I think maybe that’s something that should change.

Here are some links for further reading that I either didn’t fully cover or just never got around to:

This was supposed to be a quick “well that’s interesting” day or two blog post and not several weeks of on and off research as it ended up being, so I didn’t really get into as much detail as I had hoped. Perhaps I should look into other land use histories that aren’t in a language I don’t speak next time 🙃